Former students of the College of Business will remember Dr. James (Jim) Kimbell who taught accounting classes in the basement of Old Main under the Home Economics kitchen and later in Peace Hall. To celebrate his 80th birthday, Kimbell’s family recently established a scholarship endowment for accounting students in his name. Although the Kimbells left Magnolia years ago when Kimbell accepted a position at Clemson University, Diane Lambert Kimbell ’77 expressed the ties commemorated by this endowment:

“Southern Arkansas University has remained close to my heart all these years.  Jim and I met there in the fall of 1962 when it was Southern State College.  As a graduate, former employee, and faculty wife, I felt it was a special way to honor my husband whom I met, dated, and married while at SAU in Magnolia.  Since Jim’s 80th birthday is a special time in our family, and SAU is special to me, I felt this was a wonderful way to combine the two while at the same time giving future students the same opportunity that I had for the quality education that SAU offers.” 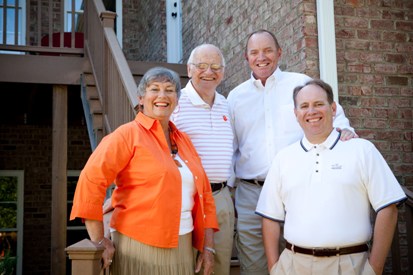 At Homecoming 2010, members of Phi Lambda Chi gathered to remember their brother Trey Von Sutton with an endowed scholarship in his name. Sutton inspired his brothers and many others on campus as he courageously fought cancer while attending classes.  Sutton’s family were special guests for the occasion.

Mr. and Mrs. Cameron Dodson were first introduced to young SAU student Corbet Lamkin by Orval Childs, head of the Agri Department.  Later the Dodsons initiated an endowment to benefit the Business Agri Department in honor of Dr. Lamkin. At the recent Honors Society Dinner, the three gathered to celebrate the completion of the endowment. 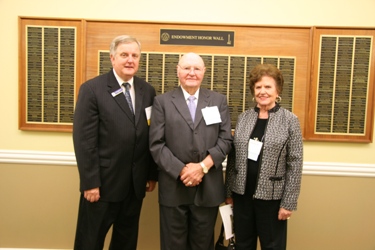 All completed endowments are permanently recognized on the Endowment Honor Wall at the entrance of the Reynolds Campus and Community Center. Endowments added to the wall this fall include the following:

Class of 1948 Scholarship Endowment initiated by Mr. Ken Crain and funded by him and his classmates of 1948.

Harold and Betty Jameson endowment to benefit the Athletic Department

Dr. Corbet Lamkin endowment to benefit the Business Agri Department  initiated by Mr. and Mrs. Cameron Dodson and funded by Dr. and Mrs. Lamkin and their friends.

Earl Miller endowment to benefit the Athletic Department was initiated by Jay Adcox and Dr. Jack Harrington and funded by the friends of Earl Miller.

Coach Rip Powell endowment to benefit the intercollegiate football program at SAU was initiated by Mr. Homer Stout and was funded by many of Coach Powell’s friends and former players.

Diana N. Pyle endowment to benefit the Special Education Department in the College of Education was initiated by Dr. Robert Terry and Dr. Diana Pyle and was funded by Drs. Jerry and Diana Pyle and their friends and family.

For a listing of all endowments, please visit the SAU Foundation website at www.saufoundation.org/giving. State appropriations now provide less than forty percent of the University’s budget, making endowments critical for the pursuit of excellence.  We ask you to consider beginning your endowment today.