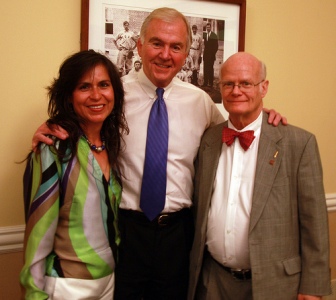 The Emerson – Thomas – Crone Lecture on Monday, April 12, 2010 at the Donald W. Reynolds Campus and Community Center in Foundation Hall drew a standing-room-only crowd.  Honored guest at the lecture were Mr. John T. Crone, III and his fiance Joy Lopez.  The Emerson-Thomas Crone Lecture in Humanities was established by an initial gift from Sarai T. Crone.  Her son, John T. Crone, III  completed the funding of her commitment as executor of her estate.  The lecture provides for an annual presentation by an outstanding figure in history, literature, psychology, sociology, or political science.

Mr. Douglas  shared stories of hunting some of the most notorious and sadistic criminals of our time : the Trailside Killer in San Francisco, the Atlanta child murderer, the Tylenol poisoner, the man who hunted prostitutes for sport in the woods of Alaska, and Seattle’s Green River killer, the case that nearly ended his own life.

He shared several video clips of his interviews with serial killers such as  Charles Manson, Sirhan Sirhan, Richard Speck, John Wayne Gacy, David Berkowitz (Son of Sam) and James Earl Ray — for a landmark study, to understand their motives and motivations. To get inside their minds.

He concluded his presentation with a scenario to allow the audience to profile the murderer.

A large number of those who attended this event remained after the lecture  to purchase one of Mr. Douglas’ books and have him personally sign it.

For more information on the Emerson-Thomas-Crone Lecture or how to begin an endowment to fund a lectureship series please contact the SAU Foundation Office at 877-235-7409.