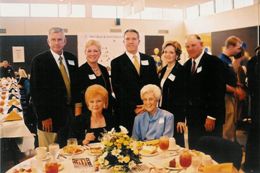 In honor of her 80th birthday, the family of Mrs. Mary Sue DeLaughter Shinn recently gave $20,000 for an endowment to benefit the Theatre Department. Mrs. Shinn received her Associate of Arts degree in Home Economics from SAU in 1939. Mrs. Shinn and her family are long-time benefactors of the University. In 1980 she and her husband endowed the Gresham J. and Sue DeLaughter Shinn Scholarship. In 1987, Jay Shinn endowed a scholarship in honor of his sister, Bobo.